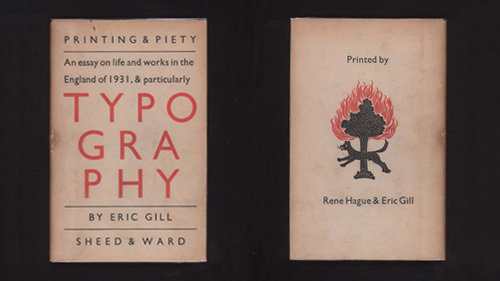 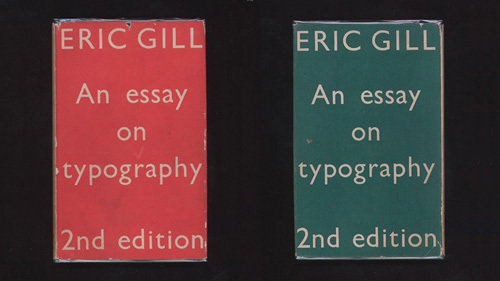 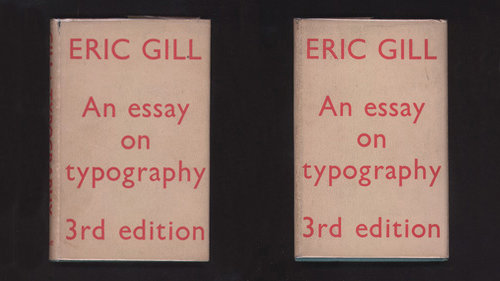 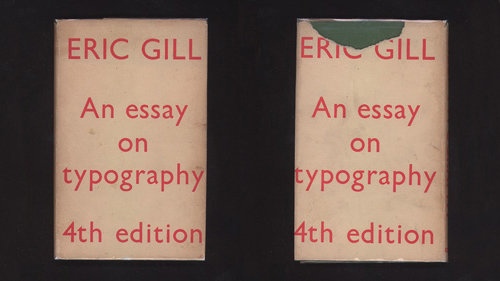 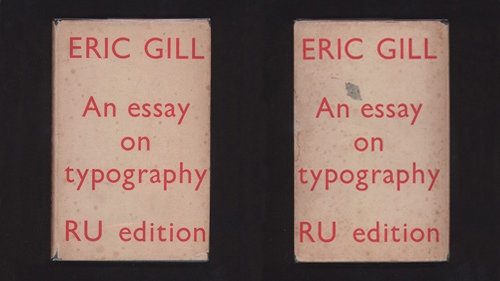 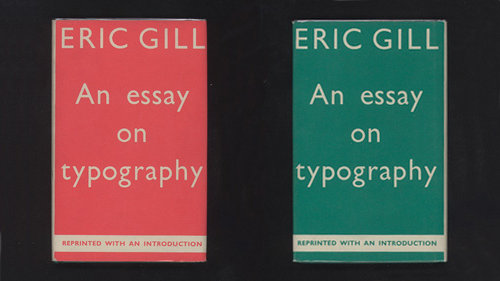 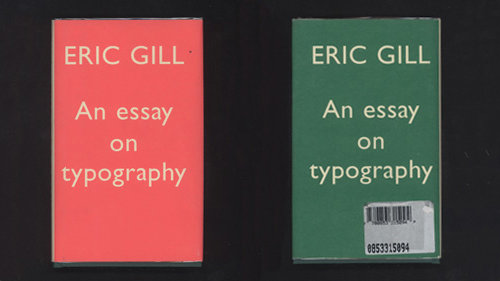 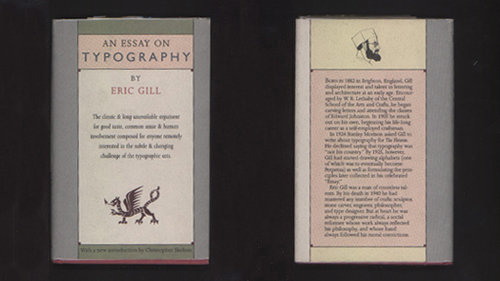 often a collection begins when i buy another collection. the ephemera society of america lists me as a “collector of collections.” however this collection began when i bought the first edition of eric gill's an essay on typography at the strand book store in new york city. i was struck by the fact that the title was not an essay on typography but printing & piety, an essay on life and works in the england of 1931, & particularly typography. it is the dust jacket of this second edition that has been etched into my visual memory and i was surprised to note a difference in the first edition. the solid red of the second edition clearly signals us to take notice. as i collected the later editions, i discovered differences with each one. the third edition makes a huge shift from the second by eliminating the red front and green back—a mistake in my mind.

i am always intrigued when a familiar dust jacket changes, especially one so visually powerful. catcher in the rye comes to mind, with its distinctive red cover that changed oddly to white. (this book also differed greatly from it first edition.) surely the second edition of an essay on typography must have made a positive difference in sales. the red alternating with green—stop and go—would have been striking. the fourth edition is consistent with the third so evidently sales were not the determining factor in the return to the red jacket. the fifth edition, from 1988, goes back to the second edition. it resurrects the red and green and announces a new introduction in a white band, eliminating the edition number. the introduction by christopher skelton adds wonderful clarification to the new edition and puts the book in a new perspective. it reconciles the original title with the second edition and gives credit to gill's son-in-law for pushing gill’s typographic viewpoints to the forefront. the jacket design is uncredited. i do miss the call-out for the fifth edition. I craved the graphic unity and sequential nature of the editions. in subsequent editions—i have one from 1996, which would be the seventh edition—“reprinted with an introduction” is eliminated in favor of simply eric gill, an essay on typography. this is the cleanest of all the jacket designs.

america had to wait for mr. gill's words until 1989. the first u.s. edition was printed in the fall of that year by godine press and the jacket dispenses with all precedent. in a quick search, i ran across paul rand's review of the exact edition for the new york times book review. he writes of the dust jacket, "a bit prissy and glaringly inappropriate to the spirit and contents of the book…would probably have seemed dated even in 1931." that pretty much says it. an ugly duck to be sure. which book would you take off the shelf? all together the uk editions form a wonderful whole and a happy collection.

Post Comment
Wonderful collection there! A great book and a must read for typophiles. I'm a proud owner of a 1988 reprint. I managed to get a copy of the third edition for my old typography lecturer on his retirement a few years ago, co-incidentally, he was born in 1941!
Con Kennedyreply