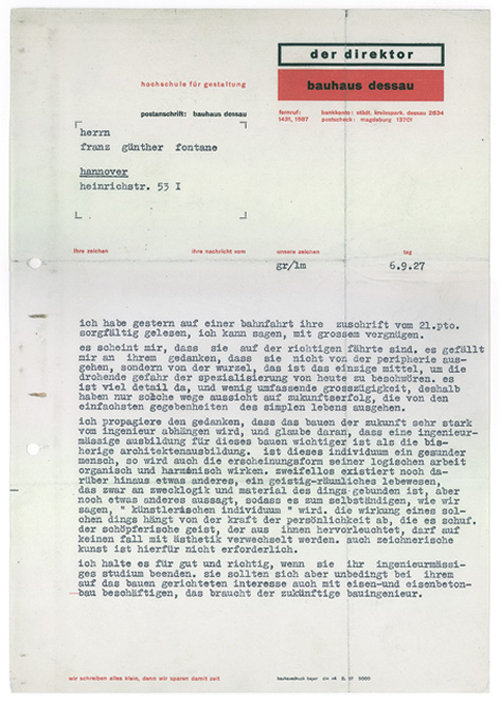 letterhead from the director, Bauhaus Dessau

when i speak about my collections, it is necessary to qualify and categorize. this is because when i rate my collections, i always consider which i would keep should i ever have to purge, without question it would be my letterhead collection. i have many beautiful letterheads. this bauhaus letterhead, signed by walter gropius on page two, is framed and exhibited at my home and holds a special place for many reasons. one being that i won it on ebay. yes, ebay. the second is that printed at the bottom of this letterhead are the words "wir schreiben alles klien, denn wir sparen damit zeit." translated this means "we write everything small, thus saving time." this translation comes via robin kinross' article from 8vo's issue of octavo 88.5 from 1988. doris pesendorfer, an austrian graphic designer who used to work with me, translated it as "we are writing everything in lower case in order to save time;" while a german client and friend, korbinian kohler, translated it as "we spell everything small because we can save time that way." i love these variations but what i love most is that herbert bayer, the designer of this letterhead, felt so strongly as to include it at the bottom, emphasizing the bauhaus philosophy in such a simple way. after reading kinross' article, i grabbed the herbert bayer monograph he published in 1967 and rediscovered he designed the whole book in lower case. even better, he states on the title page "footnote, this book has been set in one alphabet only, according to the theories presented in the articles on pages 26 and 78." both articles, one published in 1925 and the other in 1960, state bayer's beliefs in a universal alphabet and legibility. so, roughly 40 years later, he is sticking to his principles. in honor of "saving time," i have decided to use lower case for my blog. i hope you approve.

letterhead from the director, Bauhaus Dessau

Post Comment
I've been waiting 10 years for this! Thanks JP. Your fan, ABBY
ABBYreply
Looking forward to reading future articles (I'm surprised you have the time!) Best Chris B
Chris Bowdenreply
[...] This post was Twitted by designfeast - Real-url.org [...]
Twitted by designfeastreply
great entry. whenever i comment on blogs, write my own journal entries or personal emails (actually, pretty much anything i type aside from business emails) i always type in all lowercase and eschew apostrophies. now i have a great retort to any rebuke of said style. i always knew those bauhaus guys were on to something . . .
adamreply
Just a small note: In German, "klein" can mean "lowercase" or "small", so in this case probably both is meant. Nice blog you have here :)
Cenkreply
It's a difficult sentence to translate. I prefer "small" to "lowercase", because it captures Bayer's simplicity/naiveté better, and "lowercase" is a specialized term, such as Bayer wouldn't or even couldn't have used. How much time is saved by not using a shift key? And how much meaning is lost by doing without the shift key? A lot! (That article in _Octavo_ tried to show what is lost with small-only.) But a leading UK design journalist once fell foul of the ambiguity, quoting the famous words and suggesting that Bayer meant that small sizes of writing saved time (and ink?). A letter in the next issue from a typographer put him right. By the way, I found this website via http://delicious.com/cityofsound/Jan_Tschichold
Robin Kinrossreply
I was about to go grammar nazi for the lack of capitals, but this clears things up. German grammar requires you to begin every noun with a capital, I always have to go back and double check to see if I have left anything uncapitalised. So, the translation "we are writing everything in lower case in order to save time" seems to be the most spot on. Lovely letterhead by the way :)
Kalmár Nagy Andrásreply
thanks so much! i'm a big fan. i was in london that summer when that issue was being laid out. i met simon johnston is basel and 1982 and have been friends ever since. best regards and thanks so much for your comment! jp williams
adminreply
first, great stuff on the entire blog. but am writing about the note about the entire site written in lowercase. i never noticed. maybe that's because, for the most part, i write my email correspondence in lower case.
marc englishreply
as an archivist we tend to write in capital letters so it is readable but i prefer to type in lower case exactly because it is faster and maybe because i'm a little of an anarchist. really, i can't stand the uptight people who have to make everyone get in-line with everyone else.
parchivistreply
[...] that he often features on his blog, Amass. Check out the site, it’s a keeper. He also owns another gorgeous letterhead that was designed by Herbert [...]
Letterheads | AisleOnereply
[...] Found at: amass blog. [...]
HE SEEMS NICE &raquo; wir schreiben alles klein, denn wir sparen damit zeitreply
I'm a bit of a grammar nazi myself (although not a very good one), but at least this has a reason behind it. I like it. Matt PS. Great blog by the way
Mattreply
[...] Bauhaus, 1927 | Source [...]
An Archive of Letterhead &laquo; B.B. Roskeworthreply
a few things…in german determinated words must be writen with capitals. Are in this decision a determinated political feel. Otl Aicher explain it better…
luis garciareply