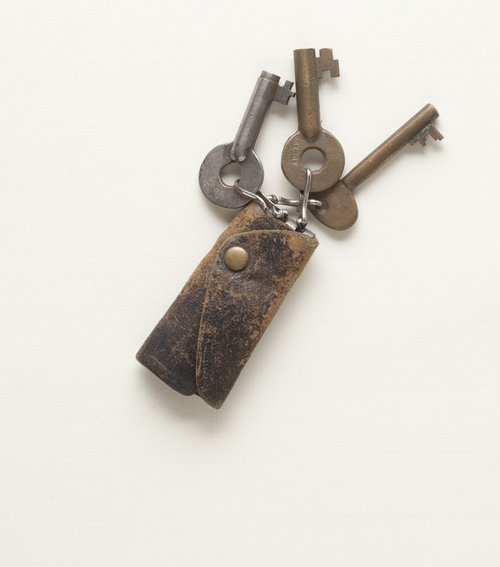 how many times do you walk pass something and not pick it up? how often have you been to a flea market, looked and examined something and not bought it? then later, the next day, the next week even, you can’t seem to get that thing out of your head. sometimes you regret it, other times you go back and it’s still there, waiting for you. here is one such item for me.

the mw studio was located on wooster street, just south of houston, for 13 years. we were on the fourth floor right below a manufacturer of brass fittings for bathrooms. they had been there for 30-plus years. at the time, we lived on ninth street in the village, and i would walk through washington square park almost every day. walking home one evening, past dusk, i crossed houston and as i reached the north side of the street something caught my eye. i looked down and just lying next to the curb was this set of keys, splayed out pretty much like this. i stopped and stared. i didn’t reach down. i just looked for a few seconds and let the image imprint on my brain and continued my walk home. not sure why i didn’t pick them up, but as i walked i kept thinking about these keys. i don’t collect keys, so i saw no reason to pick them up. just an interesting artifact. as i walked up la guardia place, there at the stoplight was a locksmith’s truck. i continued on walking north through washington square park and, as i exited the park, there was the same truck at another traffic light. well, those keys kept calling.

as I walked up fifth avenue, i turned left onto ninth street, reached into my pocket and pulled out my own keys. i looked hard at them, then i turned around and went back for these keys. as i got closer to where i first saw them, my step quickened. would they still be there? as i hit houston street, i found myself running. i could see when i got about ten feet away that they were still there, and they’ve been sitting in my desk drawer ever since. lovely, aren’t they?